Ms. Kothari has inspired audiences on three continents, which include televised broadcasts in China and a series of performances in Italy. Her achievement has been recognized in the artistic community and has earned excellent reviews; Gyorgy Sandor, the world renowned Hungarian pianist, gave a high note on her performance and described it as “Excellent”, and rewarding her first place in the Bradshaw and Buono International Piano Competition, Cosmo Buono, chairman, stated, “Ms. Kothari’s performance reflects the depth of interpretation, musicality, and technical expertise needed to distinguish herself in the world of professional performance.”

Ms. Kothari’s personal approach to her performances with uniquely titled programs have both captivated and educated audiences. The Palm Beach Post noted, “Yoko Sata Kothari’s programs look ambitious and interesting.”, and Readable Noise, the online concert review, wrote, “It is without a doubt that Yoko Sata Kothari is one of these musical magicians, demonstrating a regality in her playing, as well as wanting to further education in her program, showing not just the mastery of the art, but the depth of storytelling in them.”

Ms. Kothari has released four CD recordings: “Piano Works of J.S. Bach, Beethoven, and Liszt”, “Ravel & Balakirev: French Impressionism and Russian Romanticism”, “Fantasies – J.S. Bach & Chopin” and “Dances from France & Russia”, which received rave reviews: “Ms. Kothari is both a sensitive and strong pianist.” (American Record Guide), “One aspect of Kothari’s playing that is appealing is her power; she has a strong, masculine approach that is refreshing in a piano market where delicacy and holding back is considered king. However, when sensitivity is called for, Kothari can deliver it without descending into bathos.” (All Music Guide)

As an active chamber performer aside from her solo career, Ms. Kothari has performed with the Boca String Quartet, the Aibou Duo (a piano-violin duo), and currently is a member of the Trillium Piano Trio (piano, violin, and cello). Ms. Kothari holds a performing arts degree from the Kunitachi College of Music in Tokyo. Her teachers include Takako Maeda, Miwako Tsukada, as well as Dr. Roberta Rust and Phillip Evans at the Conservatory of Music at Lynn University in Boca Raton, Florida. 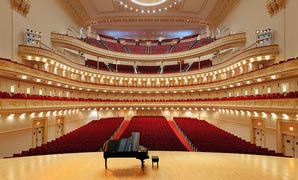 On May 1st, it was announced that Yoko had been chosen as a First Prize Winner of the 2017 Bradshaw & Buono International Piano Competition, and was invited to perform at the Winners’ Recitals held Sunday, May 21, 2017 in Weill Recital Hall at Carnegie Hall.