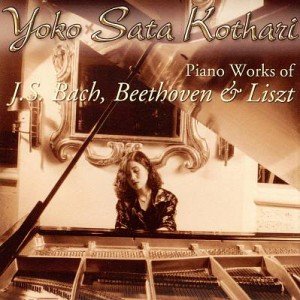 Although the universe of music written for the piano is truly enormous and of impressive variety, there’s only a small portion of the repertoire that a concert artist is more or less expected to play. Whilst a pianist might be able to sneak into a program something brazen by Bartók, Ginastera‘s fiery Malambo, a luxuriant Feuille d’Album of Medtner, or some other desirable obscurity, the reality is simpler — certain pieces of Bach, Beethoven, Schumann, and Chopin. That is the bread and butter of piano players, who are just as likely, if not more so, to have a career performing at college campuses, community centers, and at private soirées as they are playing at concert halls in major cities. A breach has opened between classical record companies and the majority of classical artists — record companies aren’t really looking to do a lot of standard literature with artists, no matter how well they might play it, as they already have a backlog of such recordings by others sitting in the warehouse. Artists, however, have to respond to the public to a certain extent by playing pieces they know and want to hear. Moreover, artists want to have recordings on hand to vend at their recitals, as this not only helps generate some additional income, it provides a memento of the artist’s performance that continues to give long after the concert program has disappeared into a scrapbook.

An increasing number of artists have decided to take matters into their own hands; to hell with the record companies’ dust-gathering inventories, we are going to make our own recordings of whatever we want, because we need them. Yoko Sata Kothari is just such an artist; a winner of a number of piano competitions in her native Japan, Kothari ultimately settled in Florida, where she teaches and plays a round of concerts year round in addition to periodically returning to Japan to play. YDK Productions is Kothari‘s own concern, and she has produced at least two CDs, of which Piano Works of J.S. Bach, Beethoven & Liszt is the first. All of these pieces are well known and often recorded, and chances are Kothari wouldn’t have been able to sell this program to a big — or even a moderately sized — classical record concern. The recording is a little dry, and the Bach performances, while good, seem a little more technically pristine than particularly emotive. But the rest of it is superb; a fearsome, crashing Liszt Funerailles, a powerful and lightly syncopated reading of Beethoven‘s Sonata No. 31 in A flat, and concluding with a Liszt La Campanella that resonates with the same romantic authority as a crackling old 78 of some legendary master of the past.

With Yoko Sata Kothari, the major league classical labels don’t know what they’re missing. However, that comes as no concern to her audiences; if their ears are on straight, this disc will serve both as a memento of a terrific pianist and a source of enjoyment for some time to come. One must admire Kothari‘s pluck in going her own way; that she does it for the most part “right” is an aspect that many of her colleagues are still working on in producing their own CDs; more power to all of them, but congratulations to Kothari!